If you know me, you may know that I love anything that has an engine!  A biker, a petrol head, adventure seeker and a deep love for Hello Kitty pretty much sums me up.    So when Mini gave me this incredibly cool Mini Countryman to whizz around in for a while, I was very much at home!  Not just any Mini Countryman, but a Mini Cooper S edition (if you know your cars your heart may have just added an extra beat).  Here is my account of a 2 week affair with a Countryman. 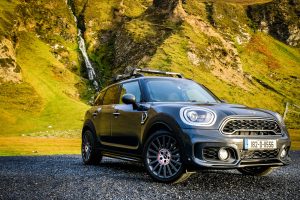 I was headed out West, Achill Island to be specific, for the weekend with some of my mad friends.  As Met Eireann revealed the weather forcast of Storm Callum for that weekend I was so disappointed!  However, as we know in Ireland, if you let the weather stop you, you would never get anything done!  I packed up the Mini, surf board and all and headed West just before the Storm was due to hit.  I managed to get to Achill within 8 minutes of sundown and headed to my favourite spot to take my first snap of the Countryman.  Boldly she stood, between the crashing waves and rugged landscape of the West, looking very much at home!  This Mini adventure was just getting started. 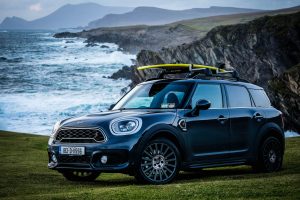 So a little background about this Countryman.  In 2010 Mini launched their first SUV style crossover car called the Countryman.   A step up from the Classic 3 door small Mini,  there is nothing “mini” about this Mini! It’s quite a large car, with 5 seats (yes, adult ones!) and a really decent size boot, it certainely hits the “family car” bracket!   The Countryman allowed the regular Mini user to trade up for an XL mini, with extra space, doors and just MORE!    You may be thinking a bulked up Mini  wouldnt be so much fun to drive.  Delete that thought!  This has to be one of the most fun cars I’ve ever driven! 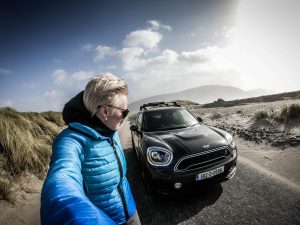 The John Cooper Works eddition adds that extra race tuning to the styling of the car with some very nice alloys, red/black leather interior, with bucket seats and lots of lovely chrome!  This 2 litre unleaded produces  189bhp and boy do you hear all about it!  The engine almost has a choir of tones as it automatically flicks through the 7 speed gearbox.   It is glued to the road with the incredible handling and the solid feel of a heavy SUV, while remaining so nimble!   No amount of quick turns, Irish bottomless potholes or Storm Callum gusts could unsteady her.  The car handles it’s power so incredibly well!  The solid feeling makes it very comforting to drive, especially on longer journeys.  Achill was a 288Km trip from Dublin, so I hit the cruise control and relaxed into the very hugging bucket seats and watched the miles tap on. 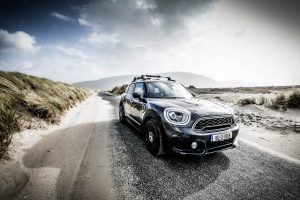 As for fuel I was surprised at it’s capability to be economical!  The journey from Achill to Dublin took a 1/4 of a tank which is a lot less than the pound of flesh I was expecting.  The interior dash has kept quite a lot of old Mini characteristics, with that circular centre piece and retro dials for speed.  The onboard computer can tell you everything from tyre pressure to the torque of the engine, to where to go for a breakfast!  It pairs with your phone seamlessly and automatically sync’s up with the Siri’s helpful handsfree text and call options all at the touch of a button from the wheel. 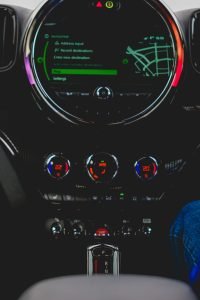 Storm Callum blasted the West Coast overnight on Thursday leaving raging seas and sand everywhere, yes everywhere…!   I was delighted to see the Countryman still in one piece in the car park.  Having met up with my mad friends, we spent the weekend enjoying the Wild Atlantic Way and it’s stunning coastline.  Driving the roads here feels like driving along the edge of the world.  Epic coastline looms below, crashing waves and a view to die for!  It was perfect Mini Countryman territory. 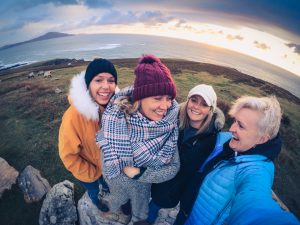 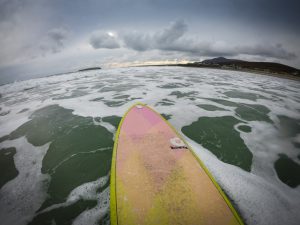 I’ve had the car now for two weeks and I won’t lie, I was a little sad handing it back to Mini.  I was not expecting to fall in love with it, as I was never really a Mini fan due to their size.  I’ve always loved Jeeps and anything high above the road.  This XL Mini ticked the all of those boxes   Since I’ve spent some real quality time with it, I’ve completely fallen for it’s quirky personality!  The sound of the engine is just like music to my ears, with a definite clunk to those doors and surely EVERYONE needs a “Mini” logo to be projected from their wing mirrors onto the pavement!  (Another cool little trick from Mini…completely pointless but I WANT it badly to appear on my car now!)

I wouldn’t normally condone an affair but this was different!!  I’m off now to try and repair a broken relationships with my Kia.  It’s so weird to now say..I’m a “Mini fan”!

So the point of this entire 2 weeks was to make a Movie for Mini.  Big thanks to Aoife, Cathriona and Wendy, who made the BEST film crew!   I hope you like it!  We certainly enjoyed making it! Make sure and pump that quality up to 1080p!

Ps. Mini have launched a 48 hour test drive …! Where will you go on yours?

2 Replies to “My Affair with a Countryman”